Having been involved in robot ethics for some years, I was delighted when the IEEE launched its initiative on Ethical Considerations in AI and Autonomous Systems, early this year. Especially so because of the reach and traction that the IEEE has internationally. (Up until now most ethics initiatives have been national efforts - with the notable exception of the 2006 EURON roboethics roadmap.) 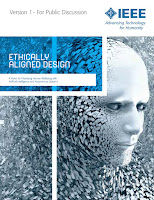 Even better this is an initiative of the IEEE standards association - the very same that gave the world Wi-Fi (aka IEEE 802.11) 19 years ago. So when I was asked to get involved I jumped at the chance and became co-chair of the General Principles committee. I found myself in good company; many great people I knew but more I did not - and it was a real pleasure when we met face to face in The Hague at the end of August.


Most of our meetings were conducted by phone and it was a very demanding timetable. From nothing to our first publication: Ethically Aligned Design a few days ago is a remarkable achievement, which I think wouldn't have happened without the extraordinary energy and enthusiasm of the initiative's executive director John Havens.

I'm not going to describe what's in that document here; instead I hope you will read it - and return comments. This document is not set in stone, it is - in the best traditions of the RFCs which defined the Internet - a Request for Input

But there are a couple of aspects I will highlight. Like its modest but influential predecessor, the EPSRC/AHRC principles of robotics, the IEEE initiative is hugely multi-disciplinary. It draws heavily from industry and academia, and includes philosophers, ethicists, lawyers, social scientists - as well as engineers and computer scientists - and significantly a number of diplomats and representatives from governmental and transnational bodies like the United Nations, US state department and the WEF. This is so important - if the work of this initiative is to make a difference it will need influential advocates. Equally important is that this is not a group dominated by old white men. There are plenty of those for sure, but I reckon 40% women (should be 50% though!) and plenty of post-docs and PhD students too.

Equally important, the work is open. The publications are released under the creative commons licence. Likewise active membership is open. If you care about the issues and think you could contribute to one or more of the committees - or even if you think there's a whole area of concern missing that needs to a new committee - get in touch!
Posted by Alan Winfield at 11:15 pm