On The Human on Temes: an emerging third replicator

Several weeks ago I was contacted by On The Human, a forum for researchers across science and the humanities to share ideas, and asked if I would like to take part in an online debate in response to an essay by Susan Blackmore. The forum runs one of these debates every two weeks and there are some pretty interesting writers and debates (which - it seems - are moderated and time limited).

So, I looked out for Sue's essay, which appeared yesterday 23rd August. I thought about it (actually had a head start because we had debated temes during a memelab meeting) and posted my response this morning. Here is Sue's essay Temes: An Emerging Third Replicator, the collected comments, and Sue's responses to those comments.
Posted by Alan Winfield at 3:36 pm No comments:

It's now over two years since I first blogged about our Linux-enhanced e-puck, designed by my colleague Dr Wenguo Liu. Since then, the design has gone through several improvements and is now very stable and reliable. We've installed the board on all 50 of our e-puck robots and it has also been adopted for use in swarm robotics projects by Jenny Owen at York, Andy Guest at Abertay Dundee and Newport.

Since the e-puck robot is open-hardware, Wenguo and I were keen that our extension board should follow the same principle, and so the complete design has been published online at sourceforge here http://lpuck.sourceforge.net/. All of the hardware designs, together with code images and an excellent installation manual written by Jean-Charles Antonioli are here. 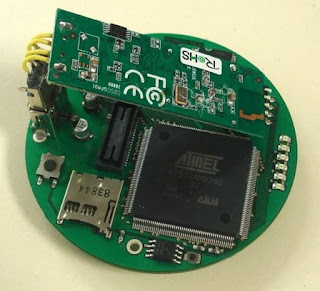 Here's a picture of the extension board. The big chip is an ARM9 microcontroller and the small board hanging off some wires is the WiFi card (in fact it's a WiFi USB stick with the plastic casing removed). 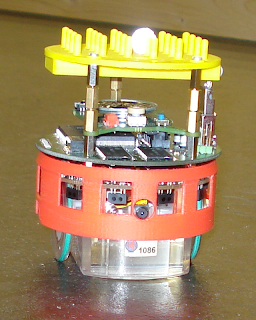 And here is a picture of one of our e-pucks with the Linux extension board fitted, just above the red skirt. The WiFi card is now invisible because it is fitted neatly into a special slot on the underside of the yellow 'hat'.

The main function of the yellow hat is the matrix of pins on the top, that we use for the reflective spheres needed by our Vicon tracking system to track the exact position of each robot during experiments. You can see one of the spheres very strongly reflecting the camera flash in this photo. The function of the red skirt is so that robots can see each other, with their onboard cameras. You can see the camera in the small hole in the middle of the red skirt. Without the red skirt the robots simply don't see each other too well, at least partly because of their transparent bodies.