Last week I found a couple of copyright violations. Am I upset? Not at all - actually I'm delighted that stuff I did in 1983 is alive and well on the Interweb thanks to the efforts of others.

The first is an online readable copy of my 1983 book The Complete Forth. It's a textbook on the programming language Forth that I was heavily into at the time. The book was first published by Sigma Press, then internationally by John Wiley, and was translated into both Dutch and Japanese. Someone - I assume from the Jupiter Ace archive - has gone to the trouble of scanning every page. Even the pull out reference card. Whoever you are, thank you.

Just before I wrote that book, I had developed a Forth programming system (a programming environment that integrates compiler and interpreter) for the NASCOM 2 Z80 micro computer. Myself and a friend then marketed Hull-Forth and, I recall, sold several hundred copies. Of course this was pre-internet so marketing meant small ads in the magazine Personal Computer World. What we actually shipped was a printed manual together with the code on a cassette tape. Floppy disks were hugely expensive and beyond the reach of hobby computers, so for saving and loading programs we used audio cassette recorders. They were slow and very unreliable; if there was a checksum error you just had to rewind, cross your fingers and try again. I can't imagine anyone feeling nostalgic for that particular technology.

This brings me to the second copyright infringement. By accident I discovered there is a webpage for NASCOM enthusiasts, and several emulators, so you can run a virtual NASCOM on your modern PC. Scrolling down the long list of software in the NASCOM repository, in the section Programming Languages, I find
Hah! Someone must have gone to alot of trouble to get the code from the original cassette*, recorded using the Kansas City Standard at, I think, 300 baud (so slow you could almost hear the noughts and ones!), to a .NAS file you can download into your NASCOM emulator.

Ok, now to get that NASCOM emulator running. It will be fun (and slightly absurd) to run Hull Forth again for the first time in about 33 years.

*I probably still have one of those cassettes in my loft**, but no way of reading the data from it.
**Along with stacks of punched cards, rolls of paper tape, and all kinds floppy disks.
Posted by Alan Winfield at 10:34 am 1 comment:

Email ThisBlogThis!Share to TwitterShare to FacebookShare to Pinterest
Labels: memoir

Forgetting may be important to cultural evolution

Our latest paper from the Artificial Culture project has just been published: On the Evolution of Behaviors through Embodied Imitation.

This article describes research in which embodied imitation and behavioral adaptation are investigated in collective robotics. We model social learning in artificial agents with real robots. The robots are able to observe and learn each others' movement patterns using their on-board sensors only, so that imitation is embodied. We show that the variations that arise from embodiment allow certain behaviors that are better adapted to the process of imitation to emerge and evolve during multiple cycles of imitation. As these behaviors are more robust to uncertainties in the real robots' sensors and actuators, they can be learned by other members of the collective with higher fidelity. Three different types of learned-behavior memory have been experimentally tested to investigate the effect of memory capacity on the evolution of movement patterns, and results show that as the movement patterns evolve through multiple cycles of imitation, selection, and variation, the robots are able to, in a sense, agree on the structure of the behaviors that are imitated.

In the artificial culture project we implemented social learning in a group of robots. Robots were programmed to learn from each other, by imitation. Imitation was strictly embodied, so robots observed each other using their onboard sensors and, on the basis of only visual sense data from a robot’s own camera and perspective, the learner robot inferred another robot’s physical behaviour. (Here is a quick 5 minute intro to the project.) 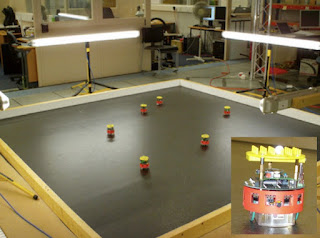 Not surprisingly embodied robot-robot imitation is imperfect. A combination of factors including the robots’ relatively low-resolution onboard camera, variations in lighting, small differences between robots, multiple robots sometimes appearing within a learner robot’s field of view, and of course having to infer a robot’s movements by tracking the relative size and position of that robot in the learner’s field of view, lead to imitation errors. And some movement patterns are easier to imitate than others (think of how much easier it is to learn the steps of a slow waltz than the samba by watching your dance teacher). The fidelity of embodied imitation for robots, just as for animals, is a complex function of four factors: (1) the behaviours being learned, (2) the robots’ sensorium and morphology, (3) environmental noise and (4) the inferential learning algorithm.

But rather than being a problem, noisy social learning was our aim. We are interested in the dynamics of social learning, and in particular the way that behaviours evolve as they propagate through the group. Noisy social learning means that behaviours are subject to variation as they are copied from one robot to another. Multiple cycles of imitation (robot B learns behaviour m from A, then robot C learns the same behaviour m′ (m mutated), from robot B, and so on), gives rise to behavioural heredity. And if robots are able to select which learned behaviours to enact we have the three Darwinian operators for evolution, except that this is behavioural, or memetic, evolution.

These experiments show that embodied behavioural evolution really does take place. If selection is random, that is robots select which behaviour to enact from those already learned – with equal probability, then we see several interesting findings.

1. If by chance one or more high fidelity copies follow a poor fidelity imitation, the large variation in the initial noisy learning can lead to a new behavioural species, or traditions. Thus showing that noisy social learning can play a role in the emergence of novelty in behavioural (i.e. cultural) evolution. That was written up in Winfield and Erbas, 2011.

But it is the second and third findings that we describe in our new paper.

2. We see that behaviours appear to adapt to be easier to learn, i.e. better ‘fitted’ to the robot swarm. The way to think about this is that the robots' sensors and bodies, and physical environment of the arena with several robots (including lighting), together comprise the 'ecological niche' for behavioural evolution. Behaviours mutate but the ones better fitted to that niche survive.

3. The third finding from this series of experiments is perhaps the most unexpected and the one I want to outline in a bit more detail here. We ran the same embodied behavioural evolution with three memory sizes: no memory, limited memory and unlimited memory.

The diagram below shows the complete family tree of evolved memes, for one typical run of the limited memory case. At the start of the run the robots were seeded with two memes, shown as 1 and 2 at the top of the diagram. Behaviour 1 was a movement pattern in which the robot traces a triangle path, behaviour 2 a square. Because this was a limited memory trial the total meme pool has only 20 behaviours - these are shown below as diamonds. Notice the cluster of 11 closely related memes at the bottom right, all of which are 7th, 8th or 9th generation descendents of the triangle meme. 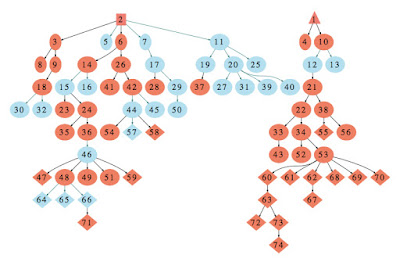 Behavioural evolution map following a 4-robot experiment with limited memory; each robot stores only the most recent 5 learned behaviours. Each behaviour is descended from two seed behaviours labelled 1 and 2. Orange nodes are high fidelity copies, blue nodes are low fidelity copies. The 20 behaviours in the memory of all 4 robots at the end of the experiment are highlighted as diamonds. Note the cluster of 11 closely-related behaviours at the bottom right.

Why is this clustering interesting? Well it's because the number and size of clusters in the meme pool are good indicators of its diversity. Think of each cluster of related memes as a 'tradition'. A healthy culture needs a balance between stability and diversity. Neither too much stability, i.e. a very small number (in the limit 1) of traditions, or too much diversity, i.e. clusters so small that there are no persistent traditions at all. Perhaps the ideal balance is a smallish number of somewhat persistent traditions.

So far I didn't mention the no memory case. This was the least interesting of the three. Actually by no memory we mean a memory size of one; in other words a robot has no choice but to enact the last behaviour it learned. There is no selection, and no clusters can form. Traditions can never even get started, let alone persist.

Of course it would unwise to draw any big conclusions from this limited experimental study. But an intriguing possibility is that some forgetting (but not too much) may, just like noisy imitation, be a necessary condition for the emergence of culture in social agents.

Related blog posts:
Robot imitation as a method for modelling the foundations of social life
Open-ended Memetic Evolution, or is it?

Posted by Alan Winfield at 3:10 pm No comments: