A No Man's Sky Survival Guide

Like many I was excited by No Man's Sky when it was first released, but after some months (I'm only a very occasional video gamer) I too became bored with a game that offered no real challenges. Once you've figured out how to collect resources, upgraded your starship, visited more planets that you can remember, and hyperdriven across the seemingly limitless galaxy, it all gets a bit predictable. (At first it's huge fun because there are no instructions, so you really do have to figure everything out for yourself.) And I'm a gamer who is very happy to stand and admire the scenery. Yes many of the planets are breathtakingly beautiful, especially the lush water worlds, with remarkable flora and fauna (and day and night, and sometimes spectacular weather). And there's nothing quite compares with standing on a rocky outcrop watching your moon's planet sail by majestically below you. 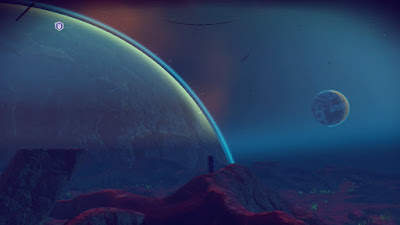 I wasn't one of those No Man's Sky players who felt so let down that I wanted my money back - or to sue Hello Games. But I was nevertheless very excited by the surprise release of a major upgrade a few weeks ago - called the Foundation upgrade. The upgrade was said to remedy the problem of the features originally promised - especially the ability to build your own planetary outposts. When I downloaded the upgrade and started to play it, I quickly realised that this is not just an upgrade but a fundamentally changed experience. Not only can you build bases, but you can hire aliens to run them for you, as specialist builders and farmers; you can trade via huge freighters (and even own one if you can afford it). Landing on one of these freighters and wandering around its huge and wonderfully realised interior spaces is amazing, as is interacting with its crew. None of this was possible prior to this release.

Oh and for the planet wanderer, the procedurally driven topography is seemingly more realistic and spectacular, with valleys, canyons and (for some worlds) water in the valleys (although not quite rivers flowing into the sea). The fauna are more plentiful and varied, and they interact with each other; I was surprised to witness a predatory animal kill another animal.

The upgrade can be played in three modes: Normal mode (which is like the old game - but with all the fancy building and freighters, etc, I described above). Create mode - which I've not yet played - apparently gives you infinite resources to build huge planetary bases - here are some examples that people have posted online.

But it's survival mode that is the real subject of this post. I hadn't attempted survival mode until a few days ago, but now I'm hooked (gripped would be a better word). The idea of survival mode is that you are deposited on a planet with nothing and have to survive. You quickly discover this isn't easy, so unlike in normal mode, you die often until you acquire some survival skills. The planet I was dropped on was a high radiation planet - which means that my exosuit hazard protection lasts about 4 minutes from fully charged to death. To start with (and I understand this is normal) you are dropped close to a shelter, so you quickly get inside to hide from the radiation and allow your suit hazard protection to recharge. There is a save point here too.

You then realise that the planet is nothing like as resource rich as you've become used to in normal mode, so scouting for resources very quickly depletes your hazard protection; you quickly get used to only going as far as you can before turning back as soon as your shielding drops to 50% - which is after about 2 minutes walking. And there's no point running (expect perhaps for the last mad dash to safety because it drains your life support extremely fast). Basically, in survival mode, you become hyper aware of both your hazard protection and life support status. Your life depends on it.

Apart from not die, there is a goal - which is to get off the planet. The only problem is you have to reach your starship and collect all the resources you need to not only survive but to repair and refuel. Easier said than done. The first thing you realise is that your starship is 10 minutes walk away - no way you can make that in one go - but how to get there..?

Here is my No Man's Sky Survival guide.

1. First repair your scanner - even though it's not much use because it takes so long to recharge. In fact you really need to get used to spotting resources without it. Don't bother with the other fancy scanner - you don't have time to identify the wildlife.

2. Don't even think about setting off to your ship until you've collected all the resources you need to get there. The main resources you need are iron and platinum to recharge your hazard protection. I recommend you fill 2 exosuit slots with 500 units of iron and one with as much platinum as you can find. 50 iron and 20 platinum will allow you to make one screening shard which buys you about 2 minutes. Zinc is even better for recharging your hazard protection but is as rare as hen's teeth. You need plutonium to recharge you mining beam - don't *ever* let this run out. Carbon is essential too, with plutonium, to make power cells to recharge your life support (because you can't rely on thamium). But do pick up thamium when you can find it.

3. You can make save points. I think it's a good idea to make one when you're half-way to your destination to avoid an awful lot of retracing of steps if you die. Make sure you have the resources to construct at least 2 before you set out. You will need 50 platinum and 100 iron for each save point.

4. Shelter in caves whenever you can. On my planet these were not very common so you simply couldn't rely on always finding one before your hazard shielding runs out. And annoyingly sometimes what you thought was a cave was just a trench in the ground that offered no shielding at all. While waiting for your hazard protection to (sooo slowly) recover while waiting in a cave, make use of the time to build up your iron away from the attention of the sentinels.

5. Don't bother with any other resources, they just take up exosuit slots. Except heridium if you see it, which you will need (see below). But just transfer it straight to your starship inventory, you don't need it to survive on foot.

After I reached my starship (oh joy!) repaired the launch thruster and charged it with plutonium I then discovered that you can't take off until you have also repaired and charged the pulse engine. This needs the heridium, which was a 20 minute hike (40 minutes round trip - you have to be kidding!). I just had to suck it up and repeat 1-5 above to get there and back. 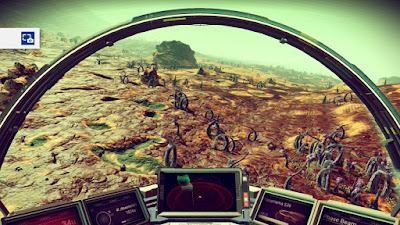 Then when you do take off (which needs a full tank of plutonium) you find that the launch thruster's charge is all used up (after one launch - come on guys!), so don't land until you find somewhere with lots of plutonium lying around, otherwise all of that effort will have been for nought.

Oh and by the way, as soon as you leave the planet you get killed by pirates.