How and Why do we have Culture?

In the run up to Science Week (7-16 March) the BA have been asking both the public and scientists for their big questions (see my previous blog What do Aliens look like). When I was asked for my Big Question I didn't have to think too hard, because I'm part of just about the most exciting research project of my life. That project is called The Emergence of Artificial Culture in Robot Societies, and sets out to answer the question "how can culture emerge as a novel property of social animals?" or to put it another way "how and why do we (humans) have culture?".

Of course you may be wondering what business a robot guy (me) has to do with a question of - essentially - evolutionary anthropology, which on the face of it has nothing to do with robotics. Well, firstly I've spent the last ten years working on Swarm Robotics - basically building robot swarms to try and understand how swarm intelligence works, and a robot swarm is a kind of primitive society of robots. Secondly, that work has opened my eyes to the extraordinary power of emergence, or self-organisation*. And thirdly, I'm passionate about trying to work on research problems that completely cross discipline boundaries, ideally across the arts/humanities, social- and natural-science boundaries. The question "how and why do we have culture" is just such a question.

I won't explain now how we intend to address this research question in detail. Suffice it to say that we are going to use a radical approach - which is to build a society of real robots, program them with (what we believe to be) a necessary and sufficient set of social behaviours, then observe them free running. Of course the big question then is will anything happen at all that is capable of being robustly interpreted as evidence of emerging proto-cultural behaviours and - if it does - would we even recognise it (since this will be an emerging robot- not human- culture; an exo-culture if you will).

I'm privileged to be part of a team that includes a computer scientist, theoretical biologist, philosopher, social scientist and art historian/cultural theorist. For more detail here is the announcement on EPSRC grants on the web. Not least in order to mitigate the risk that we fail to recognise anything interesting that might emerge, but also because we strongly believe in Open Science, the whole project will be on the web - live robots, data and all - as soon as we're up and running. And here's a picture of 2 of the robots we plan to use (called e-pucks). We've added some 'ears' so that they can chirp at each other; the artificial culture lab will have around 50-60 of these robots.

Amazing meeting yesterday afternoon at the Science Museum. Here's the story: the British Association for the Advancement of Science (BA) has been asking for science questions via their web pages for awhile, in advance of Science Week, which is 7-16 March. A question that keeps coming up is "what do aliens look like?" so, to address that question, the BA pulled together a small panel which met yesterday. Our brief was to come up with some plausible alien life forms that can be visually presented during Science Week. The keyword here is plausible. It would be easy to pluck super-exotic aliens from the rich fauna of SF but then very difficult to explain the science. Of course, the fictional evolutionary science, or biochemistry, or ecosystems of even plausible aliens is going to have gaping holes, but we were tasked with trying to minimise those.

So, what did we come up with..? I can't say now but all will, I hope, be revealed during Science Week (and in this blog, then). ...and here is the press release describing our life forms. 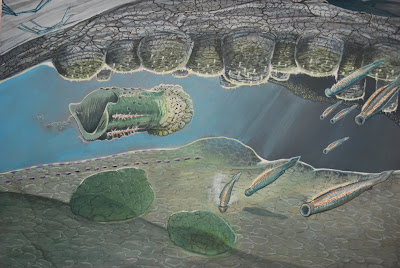 Visualisation by Julian Hume, Research Fellow at the Natural History Museum/University of Portsmouth.
Posted by Alan Winfield at 8:08 am 2 comments:

Here at @Bristol Walking with Robots is running a 3-day workshop for students and researchers in robotics, artificial intelligence and animatronics. It's a kind of masterclass whose objective is to train those students and researchers in science communication, with the hope that they'll be motivated to get involved in public engagement. I'm not going to talk about the training workshop here because it's described elsewhere in both a recent UWE press release Making Science Fun for Everyone and on EPSRC grants on the web here.

What I want to blog about here are the robot bloggers on wwrobots.wordpress.com.

The workshop has four streams with about a quarter of the students signing up for each. One of those streams is New Media, which is training its group in online reporting. Here is picture of the online newsroom. These students have been tasked with publishing stories from the other three groups. Remarkably, the blog was up and running by mid-morning Monday and has provided a more-or-less real-time record of the workshop since then. The newsroom has been busy the whole time, but never more so than right now. This afternoon the whole workshop has had an amazing opportunity to put their activities to the test on the floor of @Bristol, and since this is the half-term holidays it's pretty busy out there (to put it mildly). Our robot bloggers have been out on the floor too, recording with still photos, video and text, the extraordinary excitement of the interaction between our students, their robotics, AI and animatronics activities, and the children and families. Scroll down wwrobots and you'll quickly get a sense of that excitement.

Of course I'm focussing on just one aspect of the workshop but it was, for me, perhaps the most surprising. Firstly, by opening my eyes to the potential for Web 2.0 media to provide - in effect - real time interactive reporting; a kind of worldwide outside broadcast. It seems to me that, with this approach, there is remarkable potential to enhance and extend the reach of many kinds of public engagement or science communication.

But secondly and even more significantly here, our robot bloggers bound together the whole workshop in an altogether unexpected and enriching way.
Posted by Alan Winfield at 3:31 pm No comments: