The Tea test of robot intelligence

Here's a test for a general purpose robot: to pass the test it must go into someone's kitchen (previously unseen) and make them a cup of tea. When I give talks I surprise people by explaining that despite remarkable progress there isn't a robot on the planet that could walk (or roll) into your kitchen and make you a cup of tea. It's my Tea test of robot intelligence; no robot would pass the test (and I'll wager) will not for some time. It seems like such a straightforward thing; most humans over the age of 12 can do it. 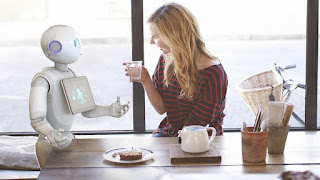 Of course there are quite a few YouTube videos of robots making tea. But like this one from 30 years ago, they pretty much all require the everything to be in exactly the right place for the robot.

So why is it so hard?

To understand, imagine yourself in a house you've never been in before. Maybe it's a neighbour's house and she's unwell - so you call round to help out. Perhaps she's ill in bed. Let's assume that you know where the kitchen is.

The first thing you need to do is locate the kettle. Not so hard for a human because you know in general what kettles look like, and even if you've never seen your neighbour's kettle before there's a pretty good chance you will find it. Of course you have other important prior knowledge - you know that (at least in British kitchens) kettles are used all the time and generally kept on a work surface - not hidden away in a cupboard.

While looking for the kettle you will have also found the sink, and next you do something really difficult (for a robot): you pick up and take the kettle to the sink, open its lid, position it under the cold water tap, then turn on the tap. You don't leave the tap running for long because you don't want to overfill the kettle, but luckily you're a pretty good judge of how much water is enough.

Then while waiting for the kettle to boil you will do something even more remarkable: you will look for a cup and a tea bag. Again your prior knowledge helps here. You know what cups look like and generally where they are stored - there may even be one on the draining board by the sink. You also know what kind of jar or packaging tea bags are found in, and you have the considerable dexterity to take one tea bag and place it in the cup near the kettle.

Breaking the task down like this really brings home the point that this is an extraordinarily difficult thing for a robot to do. And of course there's more: the robot must safely and carefully pour the boiling water from the kettle into the cup - and importantly sense when the cup is full enough to leave room for milk*.

And even then the task is by no means complete. A robot would then need to locate the fridge, open its door, identify and take out the milk (which might be either a carton, glass or plastic bottle) and bring the milk to the work surface. The robot must then judge how long to leave the tea bag in (you of course will have asked your neighbour whether she prefers her tea weak or strong).

The robot then needs to do another difficult thing: find and pick up a tea spoon and carefully extract the tea bag from the cup. Then add the milk - which of course requires first opening whatever the milk is contained in - especially hard is a cardboard carton where the robot might have to make an opening if it isn't already open (sometimes not so easy for humans). And unscrewing the top of a plastic carton isn't much easier. Pouring a dash of milk isn't easy either.

I could go on and explain the difficulty a robot then faces of picking up and carrying the tea to your neighbour.

One of the hard lessons of Artificial Intelligence that the things we thought would be difficult 60 years ago have turned out to be (relatively) easy, like playing chess, but the things we thought would be easy - like making a cup of tea - are still far from solved. Chess playing AIs are examples of narrow (single function) AI, whereas making a cup of tea in an unknown kitchen requires a wider set of general skills, that we lump together as 'common sense'.

*I am British after all!
Posted by Alan Winfield at 11:25 am No comments: