Just spent an exciting two days at the first 'all hands meeting' of our new EPSRC funded project: Autonomous Robot Evolution (ARE): from cradle to grave (read here for an introduction). There are eleven of us in total: 4 postdocs (one from each partner university), 2 PhD students, 1 technician, and the four seniors (co-investigators). 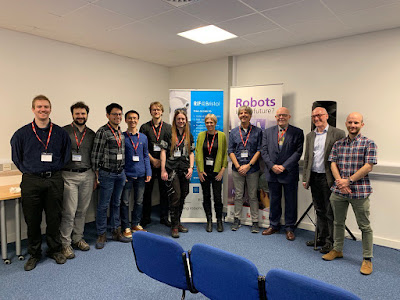 Much of the meeting was spent discussing the fundamental (and tough) questions of (1) how we design the genotype, and the mapping between genotype and phenotype, and (2) how exactly we will physically create the robots.

Let me outline where we are going with these two questions.

1. Genotype-phenotype mapping. As I explained here most evolutionary robotics research has, to date, used a direct mapping approach, in which each parameter of a robot's genome specifies one feature of the real robot (phenotype). For the robot's controller those parameters might be the weights of the robot's artificial neural network, and for the robot's body they might each specify some physical characteristic of the body (such as the length of leg segments in the illustration here). Of course in biology the mapping is indirect; to put it very simply, the genome determines how an organism develops, rather than the organism itself. And because the expression of genes is affected by the environment in which the organism is developing, identical genotypes give rise to non-identical phenotypes (albeit very similar as with identical twins); this is called phenotypic plasticity.

Because we are looking for both biological plausibility and phenotypic plasticity in this project, we have decided on an indirect mapping from genotype to phenotype. Exactly how this will work is still to be figured out, but I feel sure the genotype will need to be split into two parts: one for the robot's controller and the other for its body, and I rather suspect the mapping will be different for those two parts.

2. How to create the robots. In ARE we will adopt the engineering approach 'in which the process is embodied but takes place in a kind of evolution factory'. Now, in theory we could evolve every part of a robot's hardware, listed below.

But in practice this would be impossible; evolving any one of these subsystems would be a research project in its own right, and we're not attempting to re-run the whole of evolution in this project. Instead we will be designing and fabricating discrete modules for sensing, signalling, actuation and control, that we call 'organs'. So what will we actually evolve? It will be:
At this point you're probably thinking: hang on a minute - if you're designing the organs then what's left to evolve? It's a fair question, but in fact evolution will still have huge freedom to choose which and how many organs and where to position them in the body. And when we bear in mind that we will be co-evolving the robot's controller then the space of all possible phenotypes is vast. Of course we may need to introduce some constraints: for instance that there must be at least one controller. But in general we want as few constraints as possible so that evolution is free to explore the phenotypic space to find the best robots, bearing in mind that we will be breeding robots to be able to operate in challenging environments.

And I would argue that in specifying and designing organs we have not compromised on biological plausibility at all. Biological evolution is, after all, highly modular. Most of the organs (and systems of organs) in your body were evolved long before hominids: livers, hearts, eyes, noses, vascular systems, digestive systems, central nervous systems; all of those evolved in early vertebrates (with some repurposing along the way*). Architecturally humans have a huge amount in common with all mammals. My dog is not so different from me (and in some aspects superior: her senses of hearing and smell are much better); our key differences are in morphology and intelligence. These are the two properties that we will be exploring through co-evolution in this project.

So, in the coming few months we have some big mechanical and electronic engineering challenges in this part of the project. Here are just a few:
Challenging? For sure, but we have a wonderful team.
*See Neil Shubin's wonderful book Your Inner Fish.

Related blog posts:
Autonomous Robot Evolution: from cradle to grave
Robot Bodies and how to Evolve them
The Triangle of Life: Evolving Robots in Real-time and Real-space

Posted by Alan Winfield at 9:00 pm No comments: