Can robots be Three Laws safe?

I'm with about 25 people in a hotel in the New Forest to talk about the ethical, legal and societal issues around robotics. We are a diverse crew: a core of robotics and AI folk, richly complemented by academics in psychology, law, ethics, philosophy, culture, performance and art history. This joint EPSRC/AHRC workshop was an outcome of a discussion on robot ethics at the EPSRC Societal Issues Panel in November 2009. (See also my post The Ethical Roboticist.)

Of course in any discussion about robot ethics it is inevitable that Asimov's Three Laws of Robotics will come up and, I must admit, I've always insisted that they have no value whatsoever. They were, after all, a fictional device for creating stories with dramatic moral ambiguities - not a serious attempt to draw up a moral code of robots. Today I've been forced to revise that opinion. Amazingly we have succeeded in drafting a new set of five 'laws', not for robots themselves but for designers and operators of robots. (You can't have laws for robots because they are not persons - or at least not for the foreseeable future.)

I can't post them here just yet - a joint statement needs to be drafted and agreed first. But to answer the question in the title of this post - no, robots can't be Three Laws Safe, but they quite possibly could be Five Laws Compliant.

Postscript: here is a much better description of the workshop on Lilian Edwards' excellent blog.
Posted by Alan Winfield at 11:33 pm 2 comments:

Robot imitation as a method for modelling the foundations of social life: a meeting of robotics and sociology to explore the spread of behaviours through mimesis

Here is the video, posted earlier this month by Frances Griffiths on YouTube, of the meeting of robotics and sociology I blogged about on 21st June. No need for me to write anything more - Roger Stotesbury's excellent 10 minute film explains the whole thing...

Of course with current materials: metal and plastic, we can't grow robots so many of the ideas of morphogenetic engineering remain, for the time being, future concepts. But I think we'll see some exciting developments in this new sub-field as new materials become available.

Here is an image from our talk* on autonomous distributed morphogenesis in the Symbrion project, presented during the special session. Here you see robots being recruited to join the 2D planar organism during its formation. 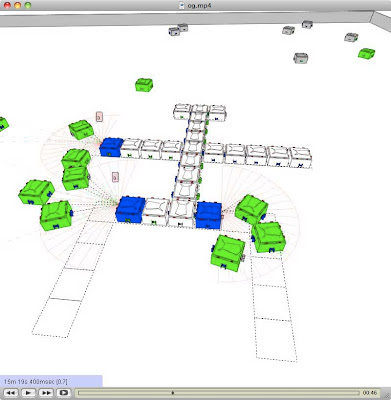 Email ThisBlogThis!Share to TwitterShare to FacebookShare to Pinterest
Labels: Symbrion

As someone who believes in - and from time-to-time advocates - the Open Science approach, I need to practise what I preach. That means being open about the things that don't go according to plan in a research project - including when papers that you think are really great get rejected following peer review. So, let me 'fess up. A paper I submitted to the highly regarded conference Distributed Autonomous Robotic Systems, describing results from the Artificial Culture project, has just been soundly rejected by the reviewers.

Of course, having papers rejected is not unusual. And, like most academics, I tend to react with indignation ("how dare they"), dismissal ("the reviewers clearly didn't understand the work") and embarrassment (hangs head in shame). After a day or two the first two feelings subside, but the embarrassment remains. None of us likes it when our essays come back marked C-. That is why this blog post is not especially comfortable to write.

My paper had four anonymous reviews, and each one was thorough and thoughtful. And - although not all reviewers recommended rejection - the overall verdict to reject was, in truth, fully justified. The paper, titled A Multi-robot Laboratory for Experiments in Embodied Memetic Evolution failed to either fully describe the laboratory, or the experiments. Like most conference papers there was a page limit (12 pages) and I tried to fit too much into the paper.

So, what next for this paper? Well the work will not be wasted. We shall revise the paper - taking account of the reviewers comments - and submit it elsewhere. So, despite my embarrassment, I am grateful to those reviews (I don't know who you are but if you should read this blog - thank you!).

And for Open Science. Well, a fully paid-up card carrying Open Scientist would publish here the original paper and the reviews. But it seems to me improper to publish the reviews without first getting the reviewers' permission - and I can't do that because I don't know who they are. And I shouldn't post the paper either, since to do so would compromise our ability to submit the same work (following revision) somewhere else. So Open Science, even with the best of intentions, has its hands tied by publications protocols.
Posted by Alan Winfield at 11:10 am 3 comments: