As a follow-up to a talk I gave last December in Warwick, we were visited in the lab today by a group of social and complexity scientists from Warwick including Frances Griffiths, Steve Fuller and Nick Lee. We had a hugely interesting day discussing the extent to which (or, indeed, if at all) robots could be used to model mimesis in society.

The day started with me describing the embodied imitation-of-movement experiments that we are currently doing here within the Artificial Culture project, and demonstrating the latest version of the Copybots experiment. After lunch we then had a round table discussion about whether or not such a simple model might have value in social science research and - somewhat to my surprise - there seemed to be strong consensus that there is value and that this (radical) new approach to embodied modelling is something we should actively pursue in future joint projects.

The meeting was filmed by Roger Stotesbury of Jump Off The Screen and I hope to post a link to the video record of the meeting on this blog.

Postscript: here is my blog post with Roger's film of the meeting.
Posted by Alan Winfield at 7:01 pm No comments:

No, not that academy, but an academy award all the same. Last night WWR won the Royal Academy of Engineering 2010 Rooke medal for the Public Promotion of Engineering. What can I say. It was wonderful for Walking with Robots to be recognised and acknowledged in this way. It was a great project. If there had been an acceptance speech we would have had a large number of thankyous: the EPSRC who funded WWR; the amazing WWR network of roboticists and engagers from about 12 universities and as many companies; Claire Rocks who - as brilliant WWR network coordinator - more than anyone made things happen, and of course the RAEng for this award. Thank you! And we had a wonderful evening.

Here we are receiving the award from Lord Browne (third from the left). On the left is Noel Sharkey and Owen Holland, and on the right me, Karen Bultitude and Claire Rocks. 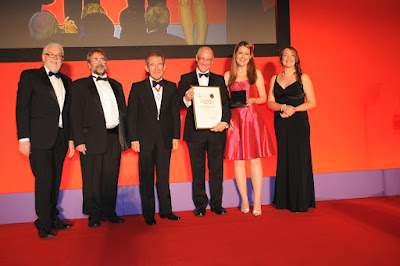 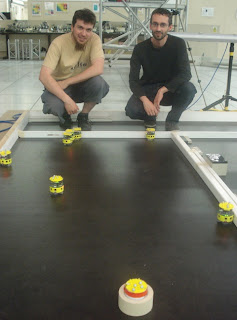 Nicolas Bredeche and his graduate student Jean-Marc Montanier have spent the last two weeks working in the lab to test out work they had already done in simulation, onto real robots. Nicolas is interested in evolutionary swarm robotics. This is an approach, inspired directly by Darwinian evolution, in which we do not design the robots' controllers (brains) but instead evolve them. In this case the brains are artificial neural networks and the process of artificial evolution evolves the strengths of the connections between the neurons. Nicolas is especially interested in open-ended evolution, in which he - as designer - does not pre-determine the evolved robot behaviours (by specifying an explicit fitness function, i.e. what kinds of behaviours the robots should evolve). Thus, even though this is an artificial system, its evolution is - in a sense - a bit closer to natural than artificial selection.
Posted by Alan Winfield at 8:08 pm No comments: