The robots are coming (to Manchester)

If you're in or around Manchester Saturday 24th - Tuesday 27th October, do come and see us at the Walking with Robots festival of robotics - part of the Manchester Science Festival.

Here are links to the events:

Posted by Alan Winfield at 11:19 am No comments:

Surrogates: not a review

Surrogates. Not a great movie* but thought provoking in a possible-robot-futures kind of way. The first thing that made it interesting was that the imagined robotic technology doesn't rely on Artificial Intelligence (AI), unlike most robot sci-fi. In that sense, therefore, its fictional future is rather more plausible than most robot movies, although still very challenging. In the Surrogates future humans put on some kind of headset that enables them to see through their robot's cameras, hear through its microphones and (presumably) smell through its olfactory sensors. This is a Brain-Computer Interface (BCI); there are two kinds of BCI, non-invasive - as in this movie, or invasive (the Matrix).

For me, however, the most interesting question raised by the movie is this. If you had the opportunity to live your life through a beautiful robot proxy, so that you see, hear and touch the world not directly but through its senses, and you interact with (most) other people even more indirectly, via their surrogates, would you..? Not just occasionally, for fun, but 24-7 - work and play. Would the experience be so compelling, so addictive, that it justifies spending your days lying prone on a couch jacked into an immersive real-reality, emerging only to pee and eat pizza (delivered presumable by surrogates)? Would social pressures or fashion compel you to surrogate-up, otherwise as a real human - lumpy and unattractive (not you dear reader) - you find yourself in a world of super-model surrogates?

Now I can really focus on Research and Public Engagement

1st October today and a new job within UWE. I'm seconded out of my associate dean role(s) within environment and technology so that I can start my senior media fellowship. At the same time I take on the new role of director of UWE's science communication unit. For the next three years I'll be able to focus all my energy on two things I'm really passionate about: research and public engagement. I feel very privileged to be in this position: I'm very grateful to the EPSRC, to colleagues at UWE for making the space for me to be able to do this, and looking forward to working with the amazing team in the SCU. 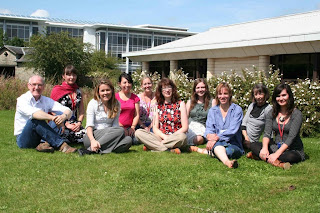 Posted by Alan Winfield at 5:53 pm No comments: