New experiments in the new lab

Last week my PhD student Mehmet started a new series of experiments in embodied behavioural evolution. The exciting new step is that we've now moved to active imitation. In our previous trials robot-robot imitation has been passive; in other words, when robot B imitates robot A, robot A receives no feedback at all - not even that its action has been imitated. With active imitation, robot A receives feedback - it receives information on which of its behaviours has been imitated, how well the behaviour been imitated and by whom.

The switch from passive to active imitation has required a major software rewrite, both for the robots' control code and for the infrastructure. We made the considered decision that the feedback mechanism - unlike the imitation itself - is not embodied. In other words the system infrastructure both figures out which robot has imitated which (not trivial to do) and radios the feedback to the robots themselves. The reason for this decision is that we want to see how that feedback can be used to - for instance - reinforce particular behaviours so that we can model the idea that agents are more likely to re-enact behaviours that have been imitated by other agents, over those that haven't. We are not trying to model active social learning (in which a learner watches a teacher, then the teacher watches the learner to judge how well they've learned, and so on) so we avoid the additional complexity of embodied feedback.

In the first tests with the new active imitation setup we've introduced a simple change to the behaviour selection mechanism. Every robot has a memory with all of its initialised or learned behaviours. Each one of those behaviours now has a counter that gets incremented each time that particular behaviour is imitated. A robot selects which of its stored behaviours to enact, at random, but with probabilities that are determined by the counter values so that a higher count behaviour is more likely to be selected. But, as I've discovered peering at the data generated from the initial runs, it's not at all straightforward to figure out what's going on and - most importantly - what it means. It's the hermeneutic challenge again.

So, for now here's a picture of the experimental setup in our shiny new* lab. Results to follow! 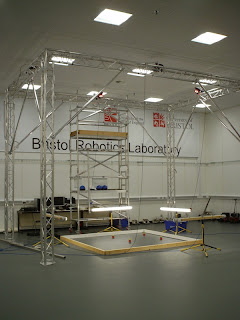 *In November 2011 the Bristol Robotics Lab moved from its old location, in the DuPont building, to T block on the extended Coldharbour Lane campus.
Posted by Alan Winfield at 3:20 pm No comments:

My first encounter with Philip Larkin was as a fresher in October 1974. As university librarian it was Larkin's annual duty to give an introductory lecture to the year's fresh intake. I recall seeing this tall, portly man with bottle-top glasses in a bank manager's suit. Not at all how I imagined a poet should look. (My Dad had told me about Larkin when I first announced I'd chosen to go to Hull University, otherwise I'm sure I'd have taken no notice at all.) To this audience of several hundred 18-year olds - more interested in eyeing each other for fanciableness than listening to some bloke in a suit - Larkin declared with a plummy, resonant voice and measured delivery, as if it was a line from Shakespeare, "...educated people should know three things: what words mean, where places are and when things happened".

My first encounter with his poetry was several months later. It was a vacation and I was at home with Mum and Dad, younger sister and brother. Larkin was to be featured in a TV documentary and the whole family gathered expectantly round the set at the appointed time. Then the first stanza was read "They fuck you up, your mum and dad/They may not mean to, but they do/They fill you with the faults they had/And add some extra, just for you." Cue acute, embarrassed silence. My Mum, I think, said "Well I don't think much of this" and without another word the TV was switched off. We didn't discuss this (in fact I don't think we ever discussed it). It was some years later that I got to know (and love) Larkin's poetry and to reflect on the idiot producer who chose to start that TV programme with arguably his worst poem, just for the shock value of the word fuck on the BBC (this was 1975). It's not that I'm prudish about the sentiment expressed, it's just not a good poem.

Fast forward about six years. I've accepted a junior lecturing post while finishing off my PhD, and find myself a member of the science faculty board. As librarian Larkin is an ex-officio member and I recall him contributing his opinions to the board's debates. I've long forgotten the subject of those debates but I vividly recall the manner of Larkin's contributions. He would stand, as if addressing parliament, and speak what I can only describe as Perfect English. His articulation, diction and metre was actor-perfect. If you had written down exactly what he said, and punctuation would have been easy for he paused in commas and semi-colons, you would get perfect prose; each word exactly the right word, each phrase perfectly turned. I was, at the time, going out with a girl who worked in the library and she told me Larkin's memoranda were the same: each a miniature essay, a perfectly formed construction of letters.

I never knew Larkin. Nobody did. He was a distant, unapproachable man and, by all accounts, not at all likeable. The closest he and I came to conversation was exchanging nods across the lunchtime staff common-room bar. I find it satisfyingly ironic therefore that a man so apparently detached and unemotional should have written what is, for me, the finest love poem of the 20th Century: An Arundel Tomb (1).

The poem starts: Side by side, their faces blurred, the earl and countess lie in stone, and then in the second verse the beautiful observation: Such plainness of the pre-baroque hardly involves the eye, until it meets his left-hand gauntlet, still clasped empty in the other; and one sees, with a sharp tender shock, his hand withdrawn, holding her hand. I love the words sharp tender shock; then in the next verse: Such faithfulness in effigy... A sculptor’s sweet commissioned grace.

In the fifth verse Larkin constructs a spine tingling evocation of the long passage of time: Rigidly they persisted, linked, through lengths and breadths of time. Snow fell, undated. Light each summer thronged the glass. A bright litter of birdcalls strewed the same bone-riddled ground. And then the remarkable conclusion of the poem: The stone fidelity they hardly meant has come to be their final blazon, and to prove our almost-instinct almost true: what will survive of us is love.

Forgive me for removing the line breaks in these extracts from the poem. In doing so I want to illustrate my observation that, in Larkin's writing, there is little distance between prose and poetry. When reading his poems I've reflected often on why it is that a man with such an apparently effortless ability to produce perfect English published so little, and agonised so much over his writing. I now realise that he didn't have a problem with writing, but with life. "The object of writing," Larkin once said, "is to show life as it is, and if you don't see it like that you're in trouble, not life.

(1) from The Whitsun Weddings, Faber and Faber, 1964. And here is both the full text of An Arundel Tomb and Larkin reading the poem.

Posted by Alan Winfield at 7:47 pm No comments: