It's been over a year since my last progress report from the Autonomous Robot Evolution (ARE) project, so an update on the ARE Robot Fabricator (RoboFab) is long overdue. There have been several significant advances. First is integration of each of the elements of RoboFab. Second is the design and implementation of an assembly fixture, and third significantly improved wiring. Here is a CAD drawing of the integrated RoboFab.

The ARE RoboFab has four major subsystems: up to three 3D printer(s), an organ bank, an assembly fixture and a centrally positioned robot arm (multi-axis manipulator). The purpose of each of these subsystems is outlined as follows:
And here is the Bristol RoboFab (there is a second identical RoboFab in York): 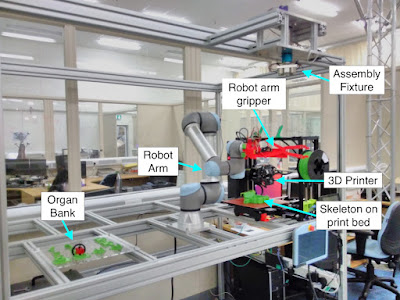 Note that the assembly fixture is mounted upside down at the top front of the RoboFab. This has the advantage that there is a reasonable volume of clear space for assembly of the robot under the fixture, which is reachable by the robot arm.

The fabrication and assembly sequence has six stages: 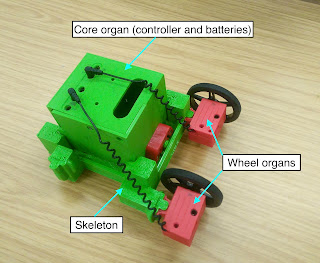 Here is a complete robot, fabricated, assembled and wired by the RoboFab. This evolved robot has a total of three organs: the core ‘brain’ organ, and two wheel organs.

Note especially the wires connecting the wheel organs to the core organ. My colleague Matt has come up with an ingenious design in which a coiled cable is contained within the organ. After the organs have been attached to the skeleton (stage 5), the robot arm in turn grabs each organ's jack plug and pulls the cable to plug into the core organ (stage 6). This design minimises the previously encountered problem of the robot gripper getting tangled in dangling loose wires during stage 6.

And here is a video clip of the complete process:

The work described here has been led by my brilliant colleague Matt Hale, very ably supported by York colleagues Edgar Buchanan and Mike Angus. The only credit I can take is that I came up with some of the ideas and co-wrote the bid that secured the EPSRC funding for the project.

For a much more detailed account of the RoboFab see this paper, which was presented at ALife 2019 last summer in Newcastle: The ARE Robot Fabricator: How to (Re)produce Robots that Can Evolve in the Real World.