Some reflections on ERL Emergency 2017

It has now been a couple of weeks since the ERL Emergency robotics competition in Piombino, Italy, so I've had time to wind down and reflect a little on the event. The competition and associated events was a great success. A total of 16 teams from 9 countries were organised into 8 multi-domain (air, land and sea) groups for the competition - see the ERL Emergency programme here for details.

From a technical point of view what interested me the most was to see how those teams improved their performances since euRathlon 2015.  Of course a precise comparison is not possible for several reasons: first, not all teams participated in both 2015 and 2017 competitions - and of those that did both personnel and robots had been refreshed, and second, since this is an outdoor competition - conditions (weather, wind and especially sea) were inevitably different.

However, the fact that euRathlon 2015 and ERL Emergency 2017 were held at the same location, with updated but broadly similar competition scenarios means that general scenario (task) level comparisons are possible. In fact we also carried forward some of the functional benchmarks from the 2015 competition, which will allow detailed analysis across both competitions (but not in this blog post).

Instead I will here give a few general (and rather subjective) comments comparing 2015 and 2017 performance. 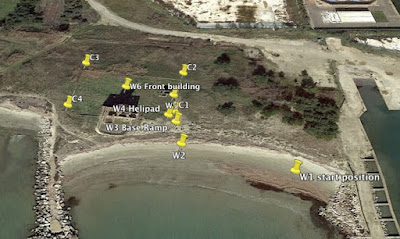 Communications continued to be a problem for teams, with all but one team in 2017 (as in 2015) choosing to communicate with their land robots via WiFi. Now any communications engineer (as I used to be) will tell you that WiFi is a hopelessly bad choice for outdoor communications. The image above shows the waypoint positions for ground robots from the start position W1 to W6 in front of the building. The control tent was located near to W1 close to the trees above the beach - about 112m from the front of the building - and with no line of sight to W6 because of the uneven terrain. And to make matters worse the land robots need to enter the building and locate the machine room - about 10m from the entrance and again with no line of sight. Despite the obvious drawbacks of WiFi those teams that did use it came up with workarounds, including using robots as mobile repeaters and ingenious systems in which robots deployed a succession of fixed repeaters. There was clearly progress in communications from 2015 to 2017 because, in 2015 - when it became clear that no team could communicate successfully with the machine room (room #3) - we relocated the machine room from the rear of the building to the front (room #1), whereas in 2017 no such relocation was necessary; those teams that reached the machine room at the rear of the building were able to communicate with their robots. See the floorplan here. 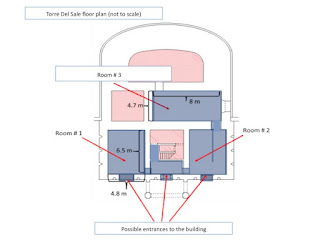 Human-robot interfaces were critical to success. In 2015 we saw some interfaces that made it extremely difficult for teams to remotely tele-operate their robots, when operators struggled with postage-stamp sized windows showing the live video feed from the robot's cameras (especially difficult when bright sunshine most days meant that light levels are very high inside the tent). In 2017 we saw not only much improved HRIs but integration between autonomous and tele-operated functions so that, for instance, operators were able to drag and drop the next waypoint then monitor the robot's autonomous progress to that waypoint, then - when at the waypoint - make use of smart machine vision to identify objects of potential interest (OPIs).

Effective human-human communication was also a critical success factor, underlining the fact that ERL Emergency tests not just robots but human robot teams or - to be more accurate - human-human-robot-robot teams. Given that typically a team's aerial, underwater and land robot operators were in separate control tents, establishing exactly how and when these operators would communicate with each other was very important. In this regard we (the judges) didn't mind how intra-team communication was organised - they could use WiFi, mobile phones, or even a runner. In 2015 the weaker teams clearly had obviously not thought about this at all and suffered as a result. Again in 2017 we saw a big improvement, with very effective intra-team communication in the most successful teams.

The full results listings are shown here for euRathlon 2015, and here for ERL Emergency 2017.

Here are a few images from the 2017 competition:

Posted by Alan Winfield at 11:31 am No comments: