Swarm robotics at the Science Museum

Just spent an awesomely busy weekend at the Science Museum, demonstrating Swarm Robotics. We were here as part of the Robotville exhibition, and - on the wider stage - European Robotics Week. I say we because it was a team effort, led by my PhD student Paul O'Dowd who heroically manned the exhibit all four days, and supported also by postdoc Dr Wenguo Liu. Here is a gallery of pictures from Robotville on the science museum blog, and some more pictures here (photos by Patu Tifinger): 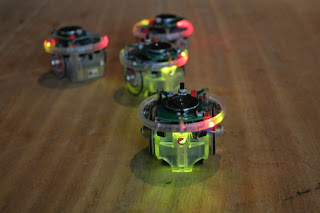 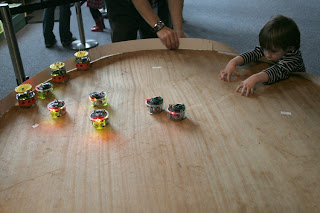 Although exhausting, it was at the same time uplifting. We had a crowd of very interested families and children the whole time - in fact the organisers tell me that Robotville had just short of 8000 visitors over the 4 days of the exhibition. What was really nice was that the whole exhibition was hands-on, and our sturdy e-puck robots - at pretty much eye-level for 5-year olds, attracted lots of small hands interacting with the swarm. A bit like putting your hand into an ants nest (although I doubt the kids would have been so keen on that.)
Let me explain what the robots were doing. Paul had programmed two different demonstrations, one with fixed behaviours and the other with learning.
For the fixed behaviour demo the e-puck robots were programmed with the following low-level behaviours:
The net effect of these low-level behaviours is that the robots will both stay together as a swarm (or flock), and over time, move as a swarm toward the external light source. Both of these swarm-level behaviours are emergent because they result from the low-level robot-robot and robot-environment interactions. While the flocking behaviour is evident in just a few minutes, the overall swarm movement toward the external light source is less obvious. In reality even the flocking behaviour appears chaotic, with robots losing each other, and leaving the flock, or several mini-flocks forming. The reason for this is that all of the low-level behaviours make use of the e-puck robots' multi-purpose Infra-red sensors, and the environment is noisy; in other words because we don't have carefully controlled lighting there is lots of ambient IR light constantly confusing the robots.
The learning demo is a little more complex and makes use of an embedded evolutionary algorithm, actually running within the e-puck robots, so that - over time - the robots learn how to flock. This demo is based on Paul's experimental work, which I described in some detail in an earlier blog post, so I won't go into detail here. It's the robots with the yellow hats in the lower picture above. What's interesting to observe is that initially, the robots are hopeless - constantly crashing into each other or the arena walls, but noticeably over 30 minutes or so we can see the robots learn to control themselves, using information from their sensors. The weird thing here is that, every minute or so, each robot's control software is replaced by a great-great-grand child of itself. The robot's body is not evolving, but invisibly its controller is evolving, so that later generations of controller are more capable.
The magical moment of the two days was when one young lad - maybe 12 years old, who very clearly understood everything straight away and seemed to intuit things I hadn't explained - stayed nearly an hour explaining and demonstrating to other children. Priceless.
Posted by Alan Winfield at 9:57 am 1 comment: