Back in 2006 I wrote about installing the excellent Player/Stage robot simulator under Linux, and the problems caused by dependencies (i.e. other packages that need to be installed first, before you can then install Player/Stage). Wouldn't it be great, I wrote, if there were a universal installer programme that would sort out all of these dependencies.

I should explain that since that post I've switched from Linux to OS X, running on a MacBook Pro, and have only just got round to installing Player/Stage. I was very pleased to discover that my plea for a universal installer has been answered by the (almost) excellent MacPorts.

And wait an hour or so - it takes awhile. However, compilation of playerstage-player fails library not found for -ljpeg. To fix this as detailed here:

5. But before you can run Player/Stage there's another fix needed, as detailed here.

And that's it. Player/Stage installed.
Posted by Alan Winfield at 11:03 am 1 comment:

Email ThisBlogThis!Share to TwitterShare to FacebookShare to Pinterest
Labels: Mac

Letter to the Times Higher

Here is the full text of my letter in this week's THE:

I am dismayed by the poor quality of journalism shown in the article Sandpits bring out worst in infantilised researchers. Of the two academics quoted the first, Professor Docherty, hasn't been to a sandpit; a second, unnamed, researcher apparently hadn't either, instead reporting what some bloke had said to him at a conference. Come on THE, you can do better than this. It can't be that hard to find one or two participants prepared to offer opinions on the record, from the 25 sandpits so far. The piece is depressing also in its use of the pejorative trope 'reality-TV' without justifying it. I recall nothing even vaguely reality-TV-like about the sandpit I attended. And micromanaged? Yes the the week was skilfully managed – but how else can you go from 30 more or less complete strangers to coherent project teams and amazing proposals in 5 days? In fact there was a significant level of self-organisation going on within the sandpit framework. And what on earth is wrong with the word sandpit? The key to creativity is working with people outside your own discipline, outside your intellectual comfort zone; the analogy with play and exploration is apt. To be brought together with 30 very, very smart people and asked to think about big research questions is exhilarating, not infantilising.

Yours faithfully
Posted by Alan Winfield at 7:16 am No comments: 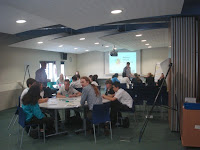 The first Robotic Visions conference has started here in the Science Learning Centre of At-Bristol! We have around 25 students from 4 schools. As the day progresses I'll be posting updates, and some pictures, here:

2.00pm The five groups have come up with their big issues:
What a great set of issues. Especially the last one.

5.00pm We just finished the celebration session in which the five groups presented their findings and recommendations to the invited VIPs. Four of the groups elected to have show and tell presentations with posters and written material - all of which were brilliant. The 'equal access' group, instead read out a powerful and moving statement that was both critical of technology for technology's sake, when set against real issues such as poverty, while at the same time calling for a strong ethical approach to robotics. Hopefully I can get hold of a copy of that statement and post it here.
Posted by Alan Winfield at 10:37 am 1 comment:

Scratchbot in the news

Check our this Youtube video of the amazing Scratchbot built my my colleagues at the Bristol Robotics Lab:

This robot not only has artificial whiskers, that 'whisk' just like real rodents' whiskers, but even more amazingly it processes the sense data from the whiskers with a high-fidelity electronic model of the barrel cortex - the small part of the rat's brain that processes sensory input from its whisker's. If you look carefully you can see the micro-vibrissae - the small extra-sensitive non-whisking whiskers at the robot's snout.