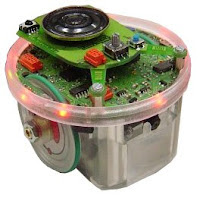 At a little over 5 cm tall the e-pucks are remarkable little robots. Here is a picture from the web pages of supplier and all round good people at Cyberbotics. Our e-pucks got their first outing at the Brighton Science Festival's Big Science Sunday, on February 18th (and let me pay tribute to festival organiser Richard). A small pack of 4 or 5 e-pucks in a table top arena proved to be a compelling attraction for kids of all ages. A great talking point that allowed us to pontificate about everything from ants and swarm intelligence to the future of robots in society. Here is a picture with my colleague Claire Rocks in mid-demonstration showing part of the arena with two of the e-pucks contrasting with the old Linuxbot on the left. It's amazing to think that the Linuxbot was state-of-the-art technology just 10 years ago. The e-pucks, with sound (microphones and speaker), vision (camera and LEDs), bluetooth radio, proximity sensors and accelerometer are astonishingly sensor-rich compared with the venerable Linuxbot and its generation.

Now the small size of the e-puck can be deceptive. A week or so before the Brighton gig I thought I would try and code up some new swarm behaviours for the robots. "Little robot - how hard can it be", I thought to myself as I sat down to an evening's light coding. Boy was I mistaken. Within the e-puck's densely packed motherboard is a complex system which belies its small size. The Microchip dsPIC microcontroller at the heart of the e-puck has come a long way from the reduced-instruction-set and reduced-everything-else 8 bit PIC I programmed with a few dozen lines of assembler for our early Bismark robot 10 years ago. And in the e-puck the microcontroller is surrounded by some pretty complex sub-systems, such as the sound i/o codec, the camera and the bluetooth wireless. It's a complex system of systems. So, suitably humbled, I shall have to take some time to learn to program the e-puck*.

Just goes to show that with robots too, appearances can be deceptive.

Email ThisBlogThis!Share to TwitterShare to FacebookShare to Pinterest
Labels: e-puck, Walking with Robots