Towards ethical robots: an update

This post is just a quick update on our ethical robots research.

Our initial ethical robot experiments were done with e-puck robots. Great robots but not ideal for what is essentially human-robot interaction (HRI) research. Thus we've switched to NAO robots and have spent the last few months re-coding for the NAOs. This is not a trivial exercise. The e-pucks and NAO robots have almost nothing in common, and colleague and project post-doc Dieter Vanderelst has re-created the whole consequence engine architecture from the ground up, together with the tools for running experiments and collecting data. 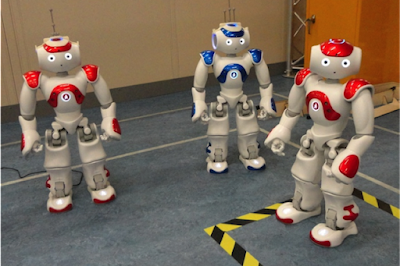 Why the NAO robots? Well, they are humanoid and therefore better fitted for HRI research. But more importantly they're much more complex and expressive than the e-puck robots, and provide huge scope for interesting behaviours and responses, such as speech or gesture.


But we are not yet making use of that additional expressiveness. In initial trials Dieter has coded the ethical robot to physically intervene, i.e. block the path of the 'human' it order to prevent it from coming to harm. Here below are two example runs, illustrated with composite images showing overlaid successive screen grabs from the overhead camera.

Here red is the ethical robot, which is initially heading toward its goal position toward the top right of the arena. Meanwhile blue - the proxy human - is not looking where it's going and heading for danger, at the bottom right of the arena. When it notices this red then diverts from its path, blocks blue, which then simply halts. Red's consequence engine now predicts no danger to blue and so red resumes progress toward its goal.

Although we have no videos just yet you can catch a few seconds of Dieter and the robots at 2:20 on this excellent video made by Maggie Philbin and Teentech for the launch of the BBC Micro:bit earlier this month.
Posted by Alan Winfield at 8:36 pm