Telling all on I'm a Scientist

In future if anyone wants to know what I think - about almost anything scientific and quite alot else - all I have to do is point them to my profile and my collected answers on I'm a Scientist get me out of here. It's been a week now since IAS concluded and the winners announced and I've had time to collect my thoughts, catch up on the day job, and reflect on taking part in this most excellent event. 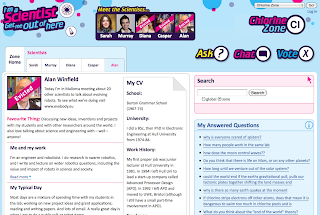 I'm a Scientist get me out of here is aptly named. By Thursday on the second week I was - on balance - more relieved than disappointed to be evicted from the virtual jungle clearing, called the Chlorine Zone, that I'd been sharing with four other scientists. (Beyond the eviction thing the analogy with I'm a Celebrity breaks down. We five were not required to undertake challenges designed to freak-out the squeamish nor rewarded with discomfort reducing morsels.)

No. I'm a Scientist is an altogether more civilised affair. It's a direct engagement with school children; meet-the-scientist on-line in which school children can ask the scientists questions on more or less anything they like. There are two types of engagement, chat and ask. The live chat sessions are booked by teachers and scheduled during school science lessons - a bit like having a panel of scientists sitting at the front of the classroom answering questions, except it's on-line. Ask allows the children to submit their questions through the web page for the scientists to answer in their own time. Both types of engagement are moderated by the good people who run I'm a Scientist.

Why then - if I'm a Scientist is so wonderful (which it is) - was I relieved to be evicted? Well, it's because after nearly 2 weeks the questions just keep coming and trying to keep up (especially given that we all have day jobs) became, if I'm completely honest, something of a test of endurance. Not counting the live chat school sessions I answered about 175 questions altogether. Other I'm a Scientist scientists who read this will scoff and say "pah, only 175!". And they'd be right - Sarah Thomas in my zone answered over 300 questions, and the awesome David Pyle in the potassium zone around 600! But even my paltry 175 questions took I reckon about 30 hours to answer, at an average 10 minutes per question (which is going fast).

But I'm not going to whinge here about my inability to keep up (although I do strongly advise future I'm a Scientists to set aside plenty of question answering time). I really want to reflect on the questions themselves. Firstly I was slightly surprised there were so few on my specialist subject of robotics. Only 22 out of the 175. But they were good ones! Here are some of my favourites:
Some of these will form the basis of future blog posts. But it was the general science questions that were the most interesting, for instance:
Brilliant - it was a kind of science soap box! I got to pontificate on life on Mars, the end of the world and human extinction, global warming, nuclear power, dreams, light years, my favourite animal, my favourite car, string theory, the Higgs Boson and dark matter. But the non-science questions make you stop and think - hmm how much do I want to reveal about what I think about antidisestablishmentarianism, my religous beliefs, resurrection or the meaning of life..?

By far the biggest category of questions was about doing science: why and how you do science, what's the best thing about being a scientist, what you think you have achieved, or will achieve and so on (and quite a few on what you will do with the prize money if you win). These are great questions because they allow you to explode some myths about science: for instance that you have to be super smart to do science, or that one scientist can change the world on their own. I was especially flattered by
If you're thinking of putting yourself forward for I'm a Scientist I would say yes go for it. It's hugely good fun and massively worthwhile. But (1) set aside plenty of time, (2) be prepared to answer questions on more or less anything and (3) be honest about yourself and what you really think about stuff.
Here are some great blog posts from other March 2011 I'm a Scientists:
Suzie Sheehy's Reflections on I'm a Scientist
David Pyle's I'm a Scientist: 600 questions later
Eoin Lettice's I'm a Scientist and I'm out of here
Posted by Alan Winfield at 6:15 pm