Just gave our talk at DARS 2010, basically challenging the common assumption that swarm robot systems are highly scalable by default. In other words the assumption that if the system works with 10 robots, it will work just as well with 10,000. As I said this morning "sorry guys, that assumption is seriously incorrect. Swarms with as few as 100 robots will almost certainly not work unless we invent an active immune system for the swarm". The problem is that the likelihood that some robots partially fail - in other words fail in such a way as to actually hinder the overall swarm behaviour - quickly increases with swarm size. The only way to deal with this - and hence build large swarms - will be to invent a mechanism that enables good robots to both identify and disable partially failed robots. In other words an immune system.

Actually - and this is the thing I really want to write about here - I think this work hints toward an answer to the question "why do animals need immune systems?". I think it's hugely interesting that evolution had to invent immune systems very early in the history of multi-cellular life. I think the basic reason for this might be the very same reason - outlined above - that we can't scale up from small to huge (or even moderately large) robot swarms without something that looks very much like an immune system. Just like robots, cells can experience partial failures: not enough failure to die, but enough to behave badly - badly enough perhaps to be dangerous to neighbouring cells and the whole organism. If the likelihood of one cell failing in this bad way is constant, then it's self-evident that its much more likely that some will fail in this way in an organism with 10,000 cells than 10 cells. And with 10 million cells (still a small number for animals) it becomes a certainty.

Here is the poster version of our paper. 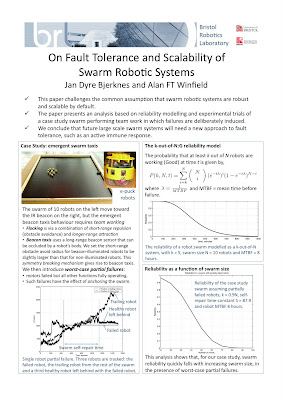