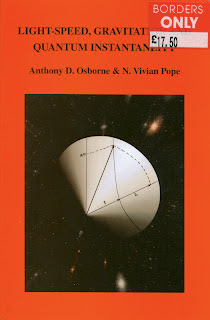 One of the most important principles of science is attributed to 13th century philosopher William of Ockham and known as Ockham’s Razor. It is the methodological principle of ontological parsimony: when presented with alternative explanations always opt for the simplest, the one with the fewest possible causes, assumptions or variables.

This book is an appeal to Ockham’s Razor, for it offers a much more economical account of special and general relativity than is present in the traditional development of relativity theory. In fact, the extent of the simplification of relativity offered by Anthony Osborne and N. Vivian Pope is such that a theory which could hitherto be fully appreciated only by those with advanced university-level mathematical training, can now be understood with little more than high school maths. But, in this book, simplification is not the same as dumbing down. Osborne and Pope present a rigorous, scholarly and philosophically coherent re-appraisal of the fundamental tenets of both Newtonian and Einsteinian physics and some of the consequences of that physics to both quantum physics and cosmology.

That re-appraisal has consequences that go far beyond an incremental re-working or adjustment of existing results. If the theory presented in this book turns out to be correct it would presage a paradigm shift in physics that would not only challenge the academic establishment but also change the way that ordinary people think about the material world. Let me give an example. Newton's first law of motion states that every object in a state of uniform motion tends to remain in that state of motion unless an external force is applied to it. In other words, that the 'natural' state of motion is in a straight line. Osborne and Pope propose an alternative first law of motion: the natural (force less) state of motion is orbital. I.e. that bodies continue to orbit unless an external force is applied. Now the Universe is full of orbital motion. From the micro-scale - electrons in orbit around nuclei, to the macro-scale - moons around planets, planets around stars, rotating galaxies etc. If this alternative first law is true, it would mean that we don't need to propose a force of gravitational attraction to account for orbital motion. This is compelling not least because it leads to a simpler and more elegant explanation. It would also explain why - despite vast effort and millions of dollars worth of research - no empirical evidence (gravity waves or gravity particles) has yet been found for how gravity propagates or acts at-a-distance. A common-sense objection to this idea is "well if there's no such thing as gravity what is it that sticks us to the surface of the earth - why don't we just float off?". The answer, according to Osborne and Pope, is that the natural (force less) orbital radius for you (given the mass of your body), is quite a long way towards the centre of the earth from where you now sit. So there is a force that means that you weigh something, it's just not a mysterious force of gravity but the real force exerted by the thing that restrains you from orbiting freely, i.e. the ground under your feet.

The world is, of course, full of alternative theories. One reason that this one deserves to be taken seriously is that it is experimentally testable. That experiment is conceptually simple: take a spinning mass; spinning one way it should weigh a little more than when at rest, spinning in the opposite direction it should weigh a little less. The problem is not conceptual but practical: the weight change predicted by Osborne and Pope is small (about one hundredth of a milligram for a 175 gram disk spinning at 18,000 revolutions per minute), thus the experimental apparatus would need to be both very strong to cope with the energy of the spinning disk and very sensitive to be able to accurately measure the weight change. The experiment is certainly difficult, but not impossible with today’s technology. What is important here is that Osborne and Pope are not asking for the ideas presented in this book to be taken on faith. The Pope Osborne Angular Momentum Synthesis can be proven, one way or the other.

This book deserves to be read and it deserves to provoke controversy. This work is not popular science. It is the culmination of a 20 year collaboration between Osborne and Pope, and a 50 year intellectual journey by N Vivian Pope (quite literally, a life’s work). To anyone who cares about the truth in physics, I commend this book. 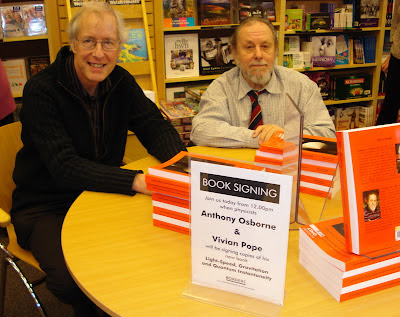 This is my foreword to this book, launched today at Borders bookshop, Swansea. The ideas in this book are significant and heretical; to paraphrase Daniel Dennett, these are Dangerous Ideas.
Posted by Alan Winfield at 10:32 pm

Email ThisBlogThis!Share to TwitterShare to FacebookShare to Pinterest
Labels: physics