Could a robot have feelings?

One of the great pleasures of giving public lectures is the questions that come from the audience, and my talk last week to the Bath U3A group was no different. A great question (and one I've been challenged with before) was "could a robot have feelings - emotions like fear, sadness or love?"

My questioner (and I guess most people) would be hoping for a comforting answer: No, only people and maybe some animals (your dog) can have feelings. In one sense that answer would be correct, because if we define feelings simply and subjectively as 'the feelings we experience when we are afraid, sad, or in love', such a definition would make those emotions uniquely human and something robots could not have by definition.

For the sake of argument let's get over that by asking a slightly different question: could a robot have artificial emotions that - in some way - are an analogue of human feelings. At this point I would normally say to my questioner, well, yes, I can conceive of a robot that behaves as if it is experiencing emotions. A humanoid robot, in other words, that acts is if it were afraid, or sad. The better the techno 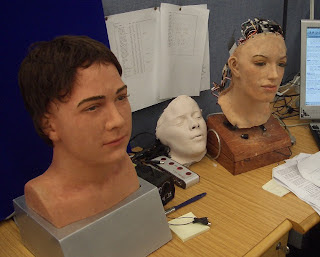 logy, then the more convincing and subtle would the (artificial) body language be. Actually we don't have to try very hard to imagine such a robot - colleagues in the lab are working on robot (heads) with artificial empathy. Here a picture.

At this point my questioner says "ah, but that robot doesn't really have feelings. It's just pretending to have feelings".

True! But don't human beings do that all the time. Isn't it the case, in fact, that we value the ability to be able to pretend to express feelings very highly, providing it's the honest deception of the actor's trade? We also value people who can make us feel in different ways: musicians, artists, poets or storytellers. Ok, I admit I'm being a little tricky here, but the point I'm trying to make is that humans can be very good at pretending to have feelings or at deceiving others into having feelings, and some (me included) have a hard time telling the difference.

Back to robots though. Yes, a robot that is programmed to behave as if it has feelings cannot, I grant, be said to actually have feelings. At best that robot is a good actor. This might seem to be the end of the issue but it's not, because the possibility of a robot that is very good at behaving as if it has feelings raises some pretty interesting issues. Why? Because in human robot interaction such a robot could have quite some power over the human. What interests me here is how such a robot would make humans feel towards it. Could a human, for instance, fall in love with an deeply (albeit artificially) empathic robot? I suspect the answer is yes.

This is a subject I'll return to in future blogs: not only the social implications of robots with artificial feelings, but also the question of whether robots could be designed that really do have feelings.
Posted by Alan Winfield at 10:36 pm